Giro has been at the forefront of aerodynamic helmet design since creating the Giro Advantage in 1985. Between snow sports and cycling, they specialize in helmet, glasses, and apparel technology. Over the last three decades, they have been perfecting their trade; based on current wind tunnel testing, the new Aerohead series represents the pinnacle of their research, shaving 15 watts off their current Advantage series.

As I was preparing for the Rio Olympics and the ITU World Championships, my coach Paulo Sousa and I were looking for ways to save precious time. I invested in ceramic bearings, the nicest tires – when he saw the data on the new Giro Aerohead MIPS Helmet, we decided that we needed to try the product to see if it could be beneficial.

I ran it through the paces to see if it could be useful, even during a draft legal triathlon. There aren’t many opportunities for gains from an aero helmet during peloton racing, but when it does play a role, it is critical.

“If you don’t look fast, you aren’t doing it right!” -Greg Billington

The helmet is one of the fastest on the market. I wasn’t going to a wind tunnel, so with that as a given, my primary concerns were with transition time and cooling, although I also took into account comfort, safety, and looks as well. If you don’t look fast, you aren’t doing it right! 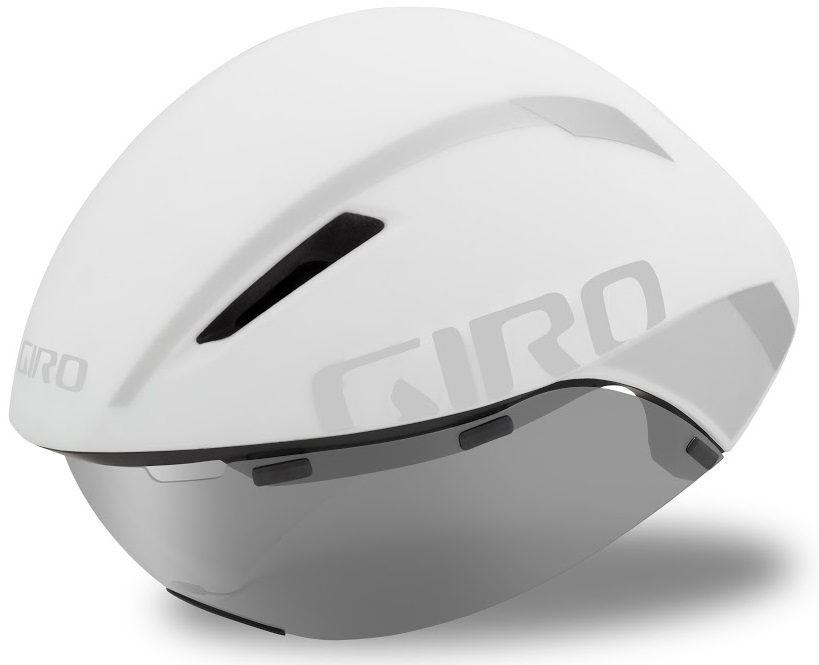 Transition
This helmet was designed with triathletes in mind. The visor can be stored in a flipped up position, which makes the helmet easier to put on. I practiced my transition a number of times, but had no issues with this stage of transition. The helmet buckle is slightly small, but with practice this is fine for T1. It takes practice to perfect putting the visor on with one hand while cycling; as with many things, the effort is worthwhile. In Cozumel, the race was so hot that I opted to race without the visor and use glasses instead. The vented holes in the Aerohead MIPS Helmet were perfect for inserting my glasses into, so I could put these on during the race and not waste time in T1.

Speed
At the Cozumel Elite World Championships, I had the fastest ride and made the swim/bike breakaway with seven other athletes. The helmet was critical during the first three minutes and in maintaining and increasing our advantage to 90 seconds over the 40k course. I was about 12th out of the water and needed to make up about 10 seconds before the breakaway was established. The helmet cannot be discounted as I was the last athlete to make the breakaway, ahead of four athletes who exited the water before me.

Cooling
I was impressed with the amount of ventilation this helmet offered. The four vents deliver a powerful flow of air while cycling. Both the Rio Olympics and the Cozumel World Championships were very warm races; Cozumel was 80-90% humidity and 80+ degrees during the bike ride. I opted to remove the visor to maximize cooling, but during training I felt good both with and without the visor. The brow pad is made out of a hydrophilic material, in order to efficiently wick away sweat and enhance cooling. It is, however, 14% warmer than the Giro’s Air Attack Shield, so take that into consideration if you are easily affected by the heat.

Visor
There is a significant amount of extra visibility when using visor instead of glasses. When wearing glasses, I have sweat build up on the lens about 45 minutes into most rides, which obscures my vision. Obviously, that was not an issue with the visor. It also provided more shielding so I was not constantly bothered by the usual cycling wind noise.

The visor is also cleverly designed so that it can be stored or placed in transition in the flipped up position. Among other benefits, this helps protect it and save space during travel.

Materials/Safety
The Aerohead MIPS Helmet is made with cutting edge technology. MIPS, multi-directional impact protection system, refers to the plastic insert designed to distribute force during side on impacts. This version is constructed with a polycarbonate shell and strong magnets so that the visor is always safely attached.

Looks
For Star Wars aficionados, this helmet is a dream come true. While I was leading the Cozumel World championships during the ride, my coach’s tweet gained in popularity:

Even still, compared to other helmets of similar aerodynamic quality, I prefer this design. It eschews an extended tail or excessively rounded shape. If this design had initiated its category of aerodynamic advancement, perhaps we triathletes would not be ridiculed for this aspect of our obsession with speed, however, the shaven legs would probably still be an issue.

Summary
This is the best helmet I have used, maybe in a class of its own. In aerodynamic testing, it significantly improves over almost all aero helmets. In transition it is fast and, with a bit of practice, has the potential to be very fast. The venting, while minimal, is effective and well designed; I felt good competing in the sweat box that was the Cozumel World Championships. The $250 price tag is competitive and if you are trying to save watts while staying cool, there is every reason to invest in the Giro Aerohead MIPS Helmet.

About the Author: Greg Billington is a 2016 triathlon Olympian. Billington began swimming, at age 8. He discovered track and cross country in high school, where he ran at Wake Forest University. Billington’s first international triathlon competition was in 2006 racing for the U.S. in the ITU Elite Junior Worlds. He is part of the USA Triathlon Project 2016 Squad and coached by the one and only, the USA Triathlon Certified Coach, Paulo Sousa.