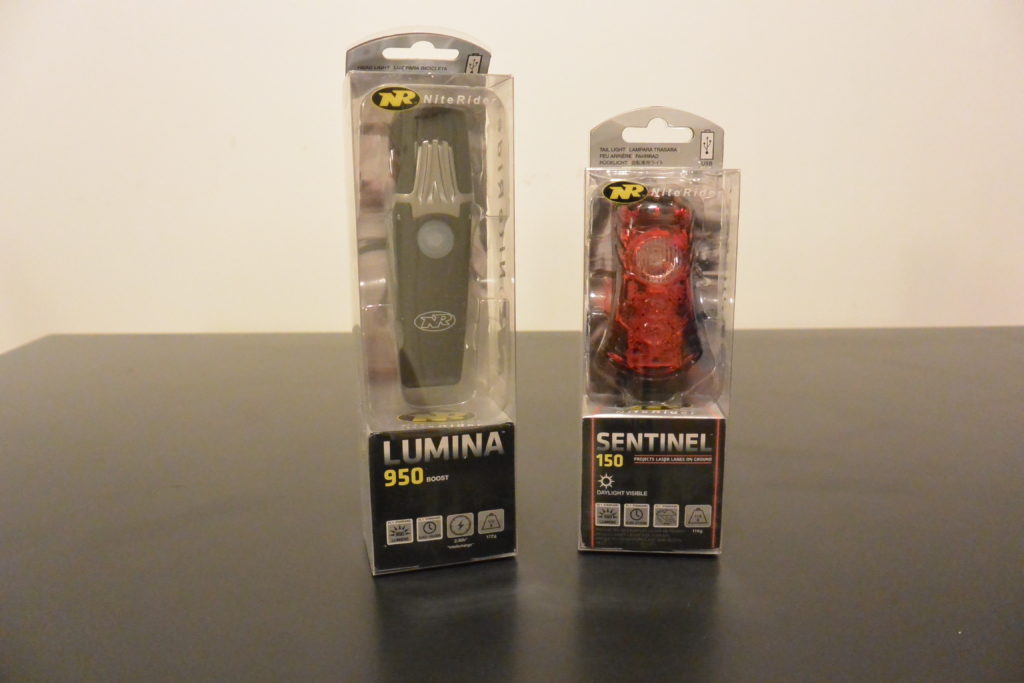 As the days get shorter and along with it your time to train outside, you may be turning to some products to light your way as dusk settles over the roads. Training with lights on your bike is a good idea to maintain visibility at any time of day, but it becomes even more important in the fall when you may be racing the sun at the end of a workout.

When you start to look at the market for bike lights, you may be overwhelmed by the plethora of choices ranging from camera or radar enabled lights to your basic red flashing tail light. To be of any use, your lights need to bright and durable. This is where NiteRider comes into the picture.

About NiteRider
NiteRider is a family business. Tom Carroll and his wife Veronica started building lights in their dining room as a way for Tom to be able to surf the waves of Southern California after dark. Eventually, their market expanded to producing lights for a range of outdoor sports from road and mountain biking to powersports. They have been leading the way in mobile lighting technology as evidenced by their list of “firsts” they keep on their website. To better understand the level of excellence NiteRider holds to, let’s take a look at their new road cycling models for 2017. 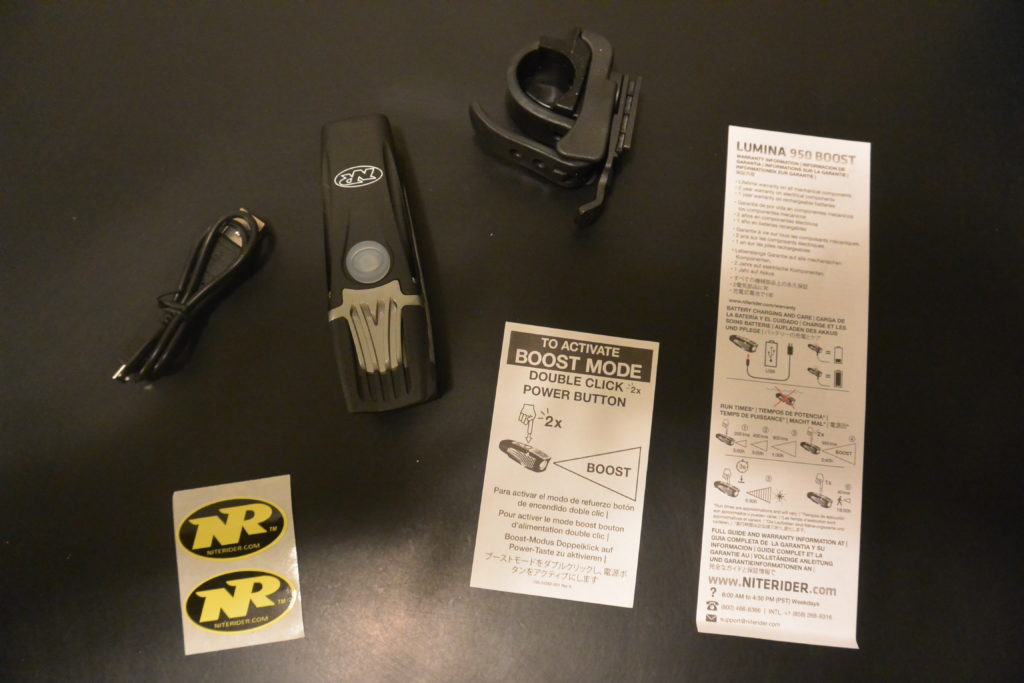 Lumina 950 Boost
The Lumina 950 Boost is the newest addition to NiteRider’s Lumina line of lights. The 950 stands for the number of lumens this light puts out. In other words, it’s BRIGHT! The Lumina 950 comes with six “modes,” five steady modes of varying brightness, and one flash mode. It is USB rechargeable with a standard MicroUSB like most non-Apple phones today and you can expect anywhere from 5 1⁄2 hours of run time in the flash mode to only 40 minutes in the “boost” mode running the full 950 lumens. It also comes with a handlebar mount as should be expected. 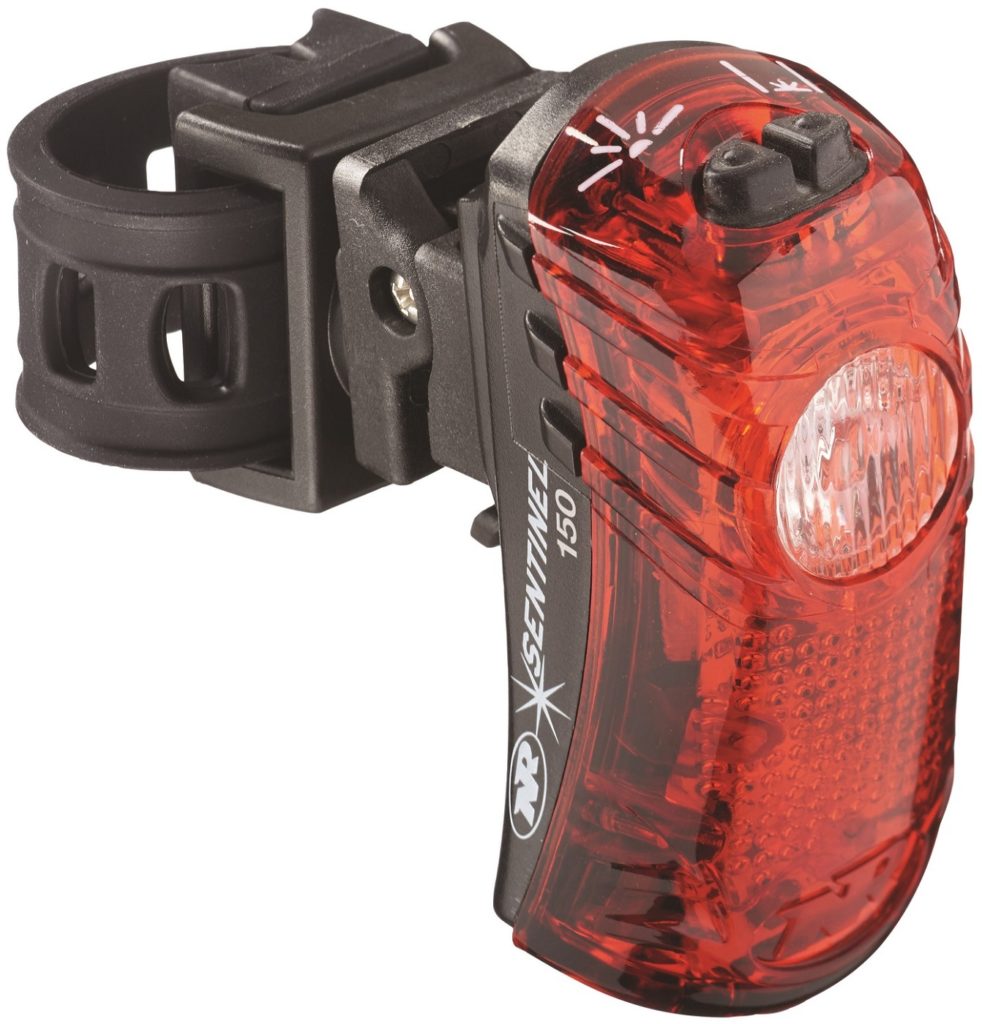 Sentinel 150
The Sentinel 150 is the newest tailight NiteRider has released. This light has seven modes, two Daylight Visibility Flash modes, two steady modes, and three laser lane modes. These laser lanes are the newest innovations for NiteRider. The light will actually project a laser line (like a laser pointer) on the ground on both sides of your bike. This creates a virtual bike lane for cars to see when passing you. These lasers can be run simultaneously with the red taillight.

The Sentinel 150 is also USB rechargeable and you can expect anywhere from 5 hours of runtime in the flash mode to somewhere around 3 hours with a flash and laser running at the same time. 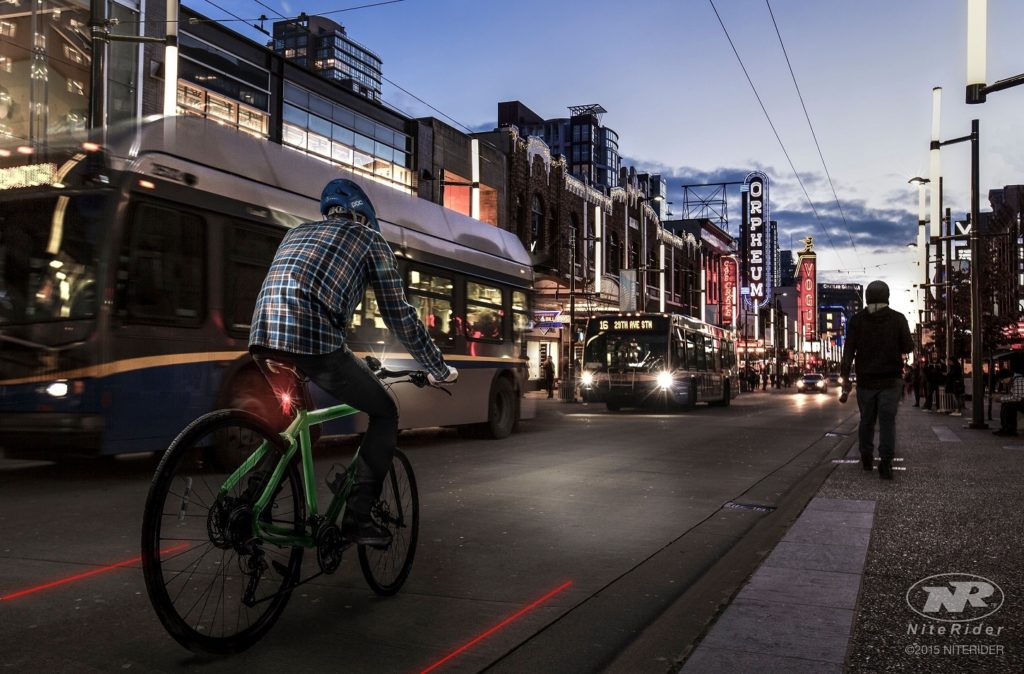 Light System Differentiators
So what sets this lighting system apart from the crowd? The most obvious is the laser lane. I don’t know of any other light that can do that. On top of that is the brightness of the lights. No other feature matters (lasers, cameras, radar) if it isn’t bright enough to see. These lights are plenty bright. I would even say they are super bright. I turned them on right out of the package without thinking about the fact they were right in my face and they nearly blinded me! Ok, slight exaggeration… but I was seeing spots for a few minutes…I’d say that it’s bright enough for my cycling purposes.

Review
So how did they stack up in day-to-day operations? I’ve put them through the paces and my overall impression is great!

Daytime Riding
I do most of my riding during the day, so I like to use lights to add that extra eye-catching visibility, so I don’t get hit by a distracted driver. The DVF (Daylight Visibility Flash) on the taillight is wonderful. It is nice and bright and it is clearly visible during the day. The headlight flash is also quite visible. I could see it reflecting off road signs at quite a long distance, so I know it could catch a driver’s eye if they are at least half paying attention.

The laser lanes are a different story. Have you ever been in a classroom or presentation where the speaker tries to use the laser pointer but the room is too bright? It’s the same concept here. I had a hard time seeing them myself and I knew where to look for them. I quickly realized it wasn’t worth the battery power to leave them on during the day. But at night, it’s a whole different story. 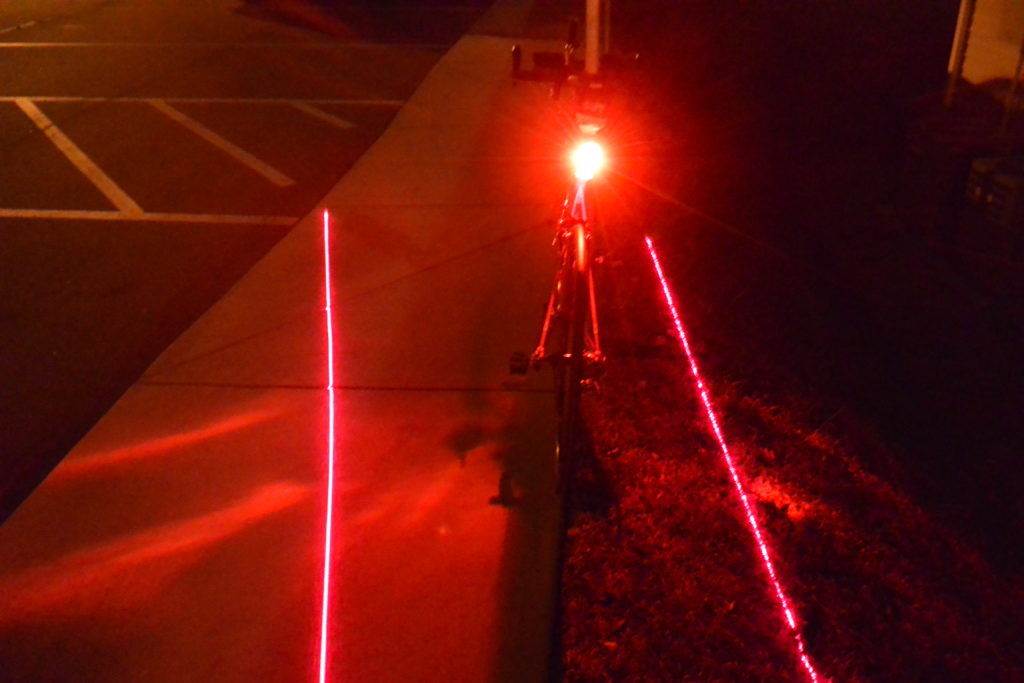 Nighttime Riding
At night is when these lights really shine (no pun intended). After all, the company is called NiteRider for a reason. The headlight’s varying levels of brightness was great to have. I usually rode with it on the “high” setting, which is about 800 lumens. The “boost” setting, giving you the full 950 lumens, was nice for those descents down roads with few street lights. A quick double click on the light was equivalent to turning on the brights in a car. It gave me enough visibility that I felt confident to descend in the aero position on my tri bike.

The laser lanes on the Sentinel 150 are awesome at night. Running the laser lanes with the steady or night time flash mode makes you that much more visible to drivers. The taillight and the lines on the ground exponentially increases the chance drivers will see you! The lasers have a flash function too, but I felt like the steady light gave drivers a better idea of how much space they actually needed to give me.

Quality
The features and brightness don’t mean a thing if the unit isn’t durable. Thankfully, these are solid! Right out of the package, I could tell they are well-built. They do not feel flimsy in any way. The buttons click well and do not feel mushy at all. Everything is clearly marked and isn’t hard to operate. I’ve only had these units a month, but they have passed the toddler test when my 2 year old got a hold of them and they came out of the experience unscathed. 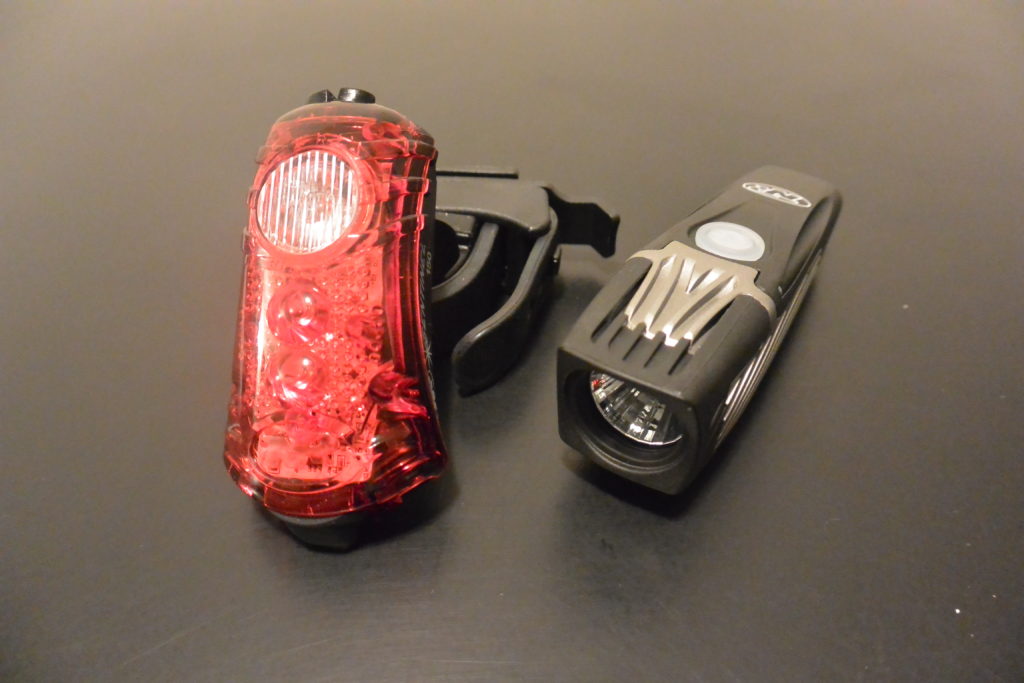 Wrap up
My opinion of the NiteRider Lumina 950 Boost and Sentinel 150 Tail Light is very high! I have loved using them and they are top notch. Yes, there are some lighting systems out there that have fancy cameras, radars, or can be controlled from your bike computer with ANT+, but the bottom line for every lighting system is that it needs to be bright and durable. These lights fit the bill. They are solid, they are bright, and the addition of the laser lanes is a huge advantage for nighttime riding! At the end of the day, lights are all about visibility and helping you get home safe. These NiteRider lights will help you with that! 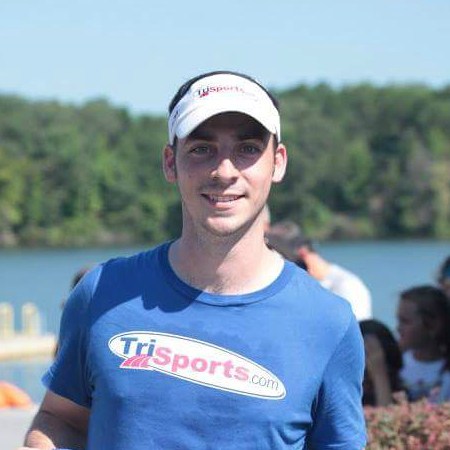 About the Author: Nate is a husband, father, and teacher. When he’s not hanging out with teenagers, he can be found swimming, biking, and running around central North Carolina or on twitter @n8deck.