Written by Eric Mellow for TriSports.com 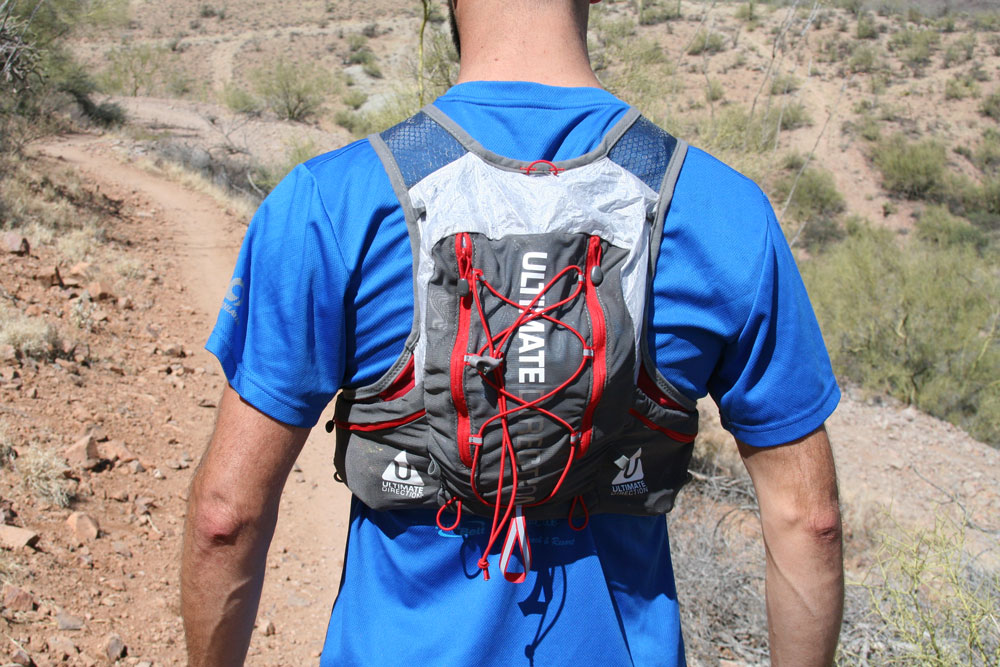 Ultimate Direction has some new hydration solutions out for the summer, and since it’s heating up in the desert, I thought I’d take one of them for a spin. Most of their new offerings are part of their Signature Series line, and are therefore designed with the help of Scott Jurek, one of the most dominant ultramarathoners in the last 10 years, and Anton Krupicka, who has racked up a number of impressive ultramarathon wins as well, including the Leadville Trail 100. I decided to take out the new Ultimate Direction SJ Ultra Vest for a few runs, but it also ended up getting a 5 hour test in the Grand Canyon. 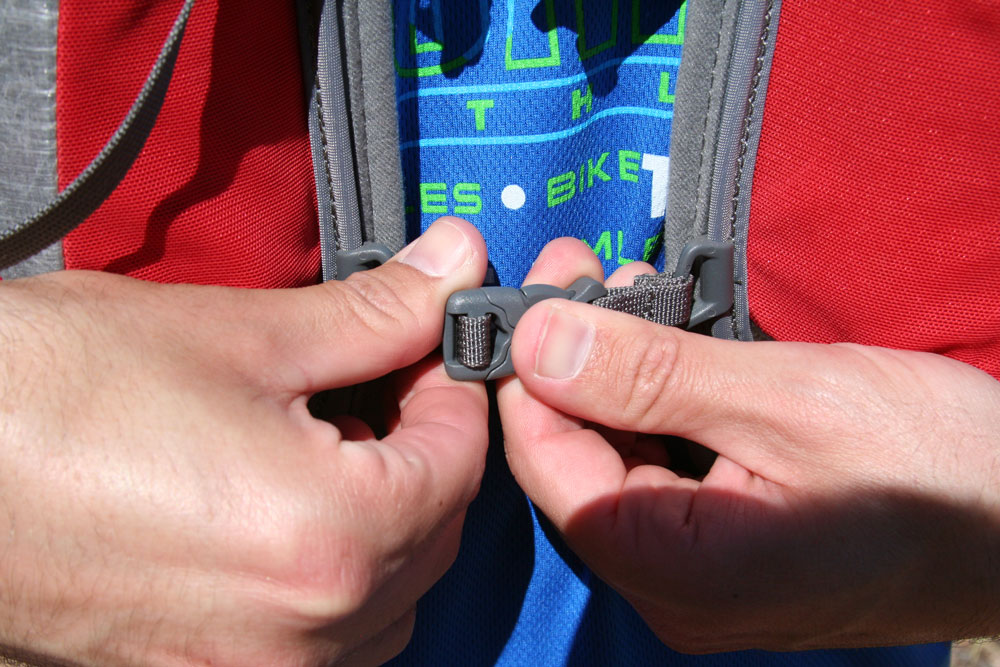 I Wish I Were the Size of a Real Boy

Apparently Scott Jurek insisted that the SJ Ultra Vest needed to be available in three sizes, because he feels that the fit is extremely important. I followed their sizing chart and measured on the smaller size of the medium, so I tried it on. Now, I’m built like a marathoner – average height and thin – so maybe I’m an exception, but the vest almost seemed to be a little big. It fit, but the adjustable straps on the front were tightened as far as they would go and it didn’t feel especially tight. I’d never tried a vest like this, with two bottles on the front, so I was worried about them bouncing. I tried on the small, but it was comically small and didn’t fit right at all. The medium it is. 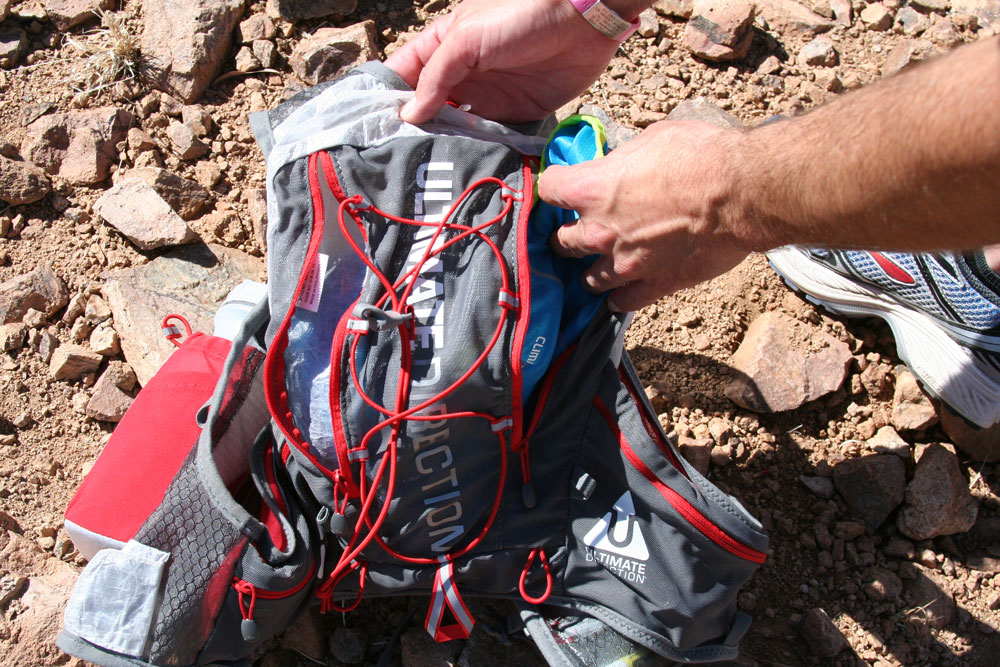 Business In The Front, Party In The Back

As I mentioned above, this vest is different from most hydration systems in that it has two bottles on the front and the back is mainly for storage. I say “mainly” because it does have an internal bungee cord system to hold a reservoir in place, as well as an exit hole for the drinking tube and loops along the shoulder straps to hold the tube in place. The main rear storage is split into two compartments, the larger one that can hold the reservoir and gear, and a smaller one that is backed with Cuben fiber, which will keep your gear from getting all sweaty and gross. 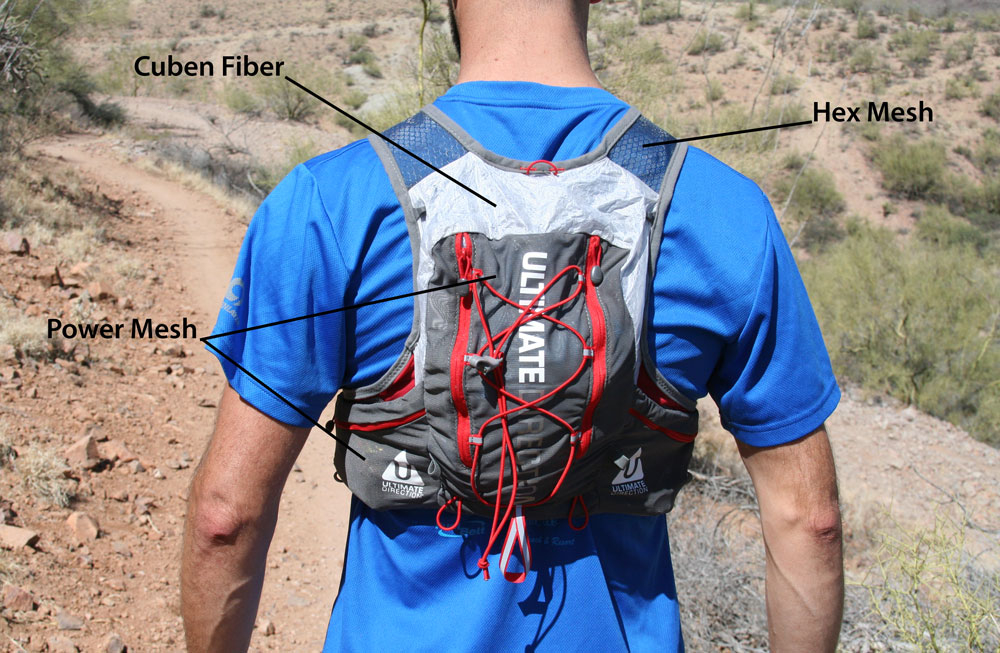 The Material Is Not Immaterial

I want to take a second here to talk about the materials that Ultimate Direction made the SJ Ultra Vest with, because they are all extremely functional and made to last. The Cuben fiber mentioned above is what is used for the sails of America’s Cup racing yachts. It’s 15 times stronger than steel, lightweight, and it is extremely resistant to moisture, UV rays, and chemicals. Most of the pockets and storage compartments are made with Power Mesh, which is awesome for two reasons: 1. it is super stretchy, so you can stuff a lot of stuff in each compartment, and 2. since it is tight and able to stretch, it holds items in place better so they don’t bounce as you run. In fact, during one run I had put only my keys in one of the pockets and I only heard them jingle once the entire run. All of these fancy materials make the SJ Ultra Vest durable, functional, and weigh in at just 7.5 ounces (without bottles). 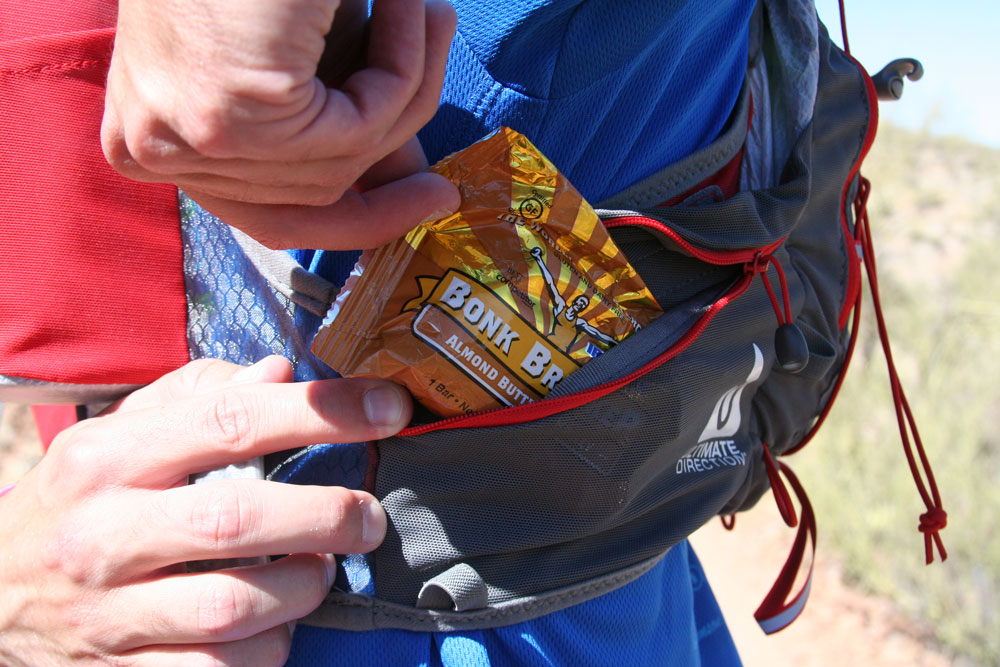 OK, let’s tackle the storage. I’ve already mentioned the main rear storage that is split into two compartments, but there is also a bungee cord system that can both be loosened to fit more stuff in the main compartment and can also be used to secure a jacket or other piece of clothing. There are Lat Pockets on the midsection straps that are made of the stretchy Power mesh and zip closed, so they are completely secure. Both have an additional pocket behind them that closes with Velcro. There are Velcro pockets on the shoulder straps just behind the water bottles, as well as mesh pockets on each side of the water bottle holders and small Velcro pockets under the water bottles (one Power Mesh, one Cuben fiber that is almost completely waterproof). I’d consider this more of an adventure vest than solely a running vest, as it also has a place for trekking poles and an ice axe loop. I don’t know what kind of extreme running Scott Jurek is doing, but I’m absolutely positive that I’ve never needed an ice axe on any of my runs. 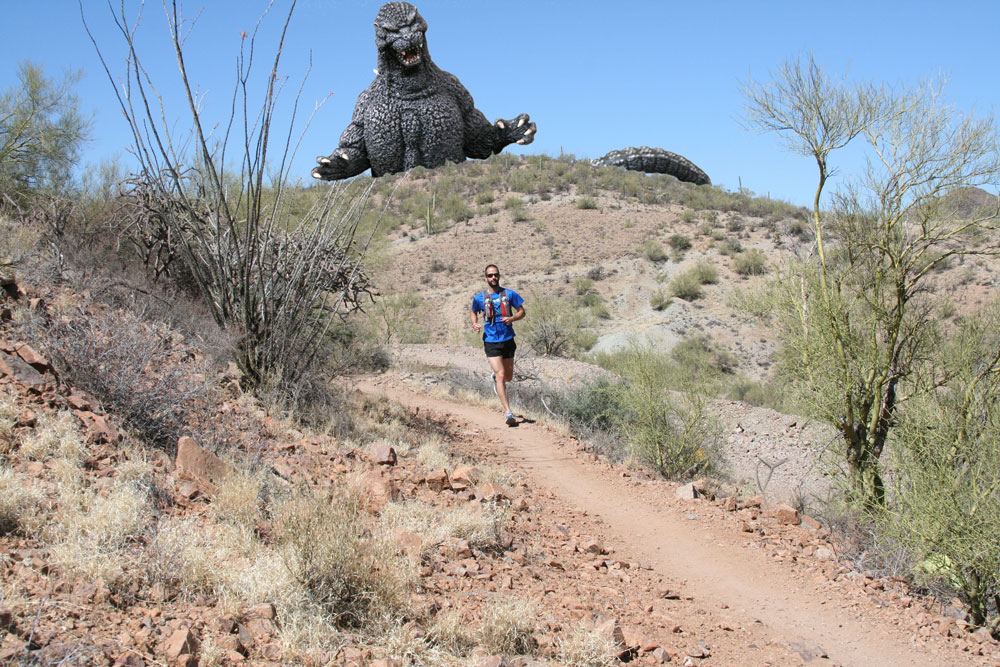 Sure, all of that stuff is really neat, but how does it run?! I wasn’t sure what to think about the two-bottle front-mounted hydration, but I was obviously game to try it out. I’ll be honest, the first run out I just filled up the bottles and went. As I had feared, the bottles seemed to bounce around a bit. Now, as I mentioned above, I seemed to be in between sizes, so I wasn’t ready to write the vest off just yet. On the second run I decided to fill up the pack. I shoved a thin running jacket and two running tops in the back and filled up the bottles. With some stuff in the back, it definitely seemed to fit a little better, as a vest full of gear is going to fill up and fit smaller. The second run went much better and this time I hardly noticed the bottles at all. As I drank from the bottles and they emptied, I could hear the water sloshing around in the bottles more and more. This was a weird experience because it makes your brain want to think that the bottles are bouncing around, even though they weren’t. After a while you get used to the sloshing sound; it’s as rhythmic as your running, and seems to just kind of fade away.

The Real Test: the bright angel TRAIL OF DOOM INTO THE SOULLESS HEART OF THE GRAND CANYON!

Is it comfortable for the long haul? After a 5 hour hike/run into and out of the Grand Canyon, I feel like I can answer that pretty well. Because I drove up that morning, I got to the Grand Canyon a little late. I didn’t start my adventure until about 11:00 a.m. I took the Bright Angel Trail 6 miles into the canyon and stopped at Plateau Point, so I could admire the view of the Colorado River. I reached Plateau Point at about 1:15 and, even though the weather at the rim was nice, in the middle of the canyon the temperature crept over 90 degrees. After some time to take in the beautiful views and enjoy a short rest, I turned around and started my trek out, making it back to the top just before 4:00 p.m. After 5 hours, 12 miles, and 6,000 feet of elevation change, the SJ Ultra Vest was as comfortable as when I put it on. The Hex Mesh was breathable and didn’t absorb any moisture. Since the vest is light, it didn’t feel like a burden on my shoulders. Also, since the edges of the straps are lined, I didn’t have any issues with chafing. 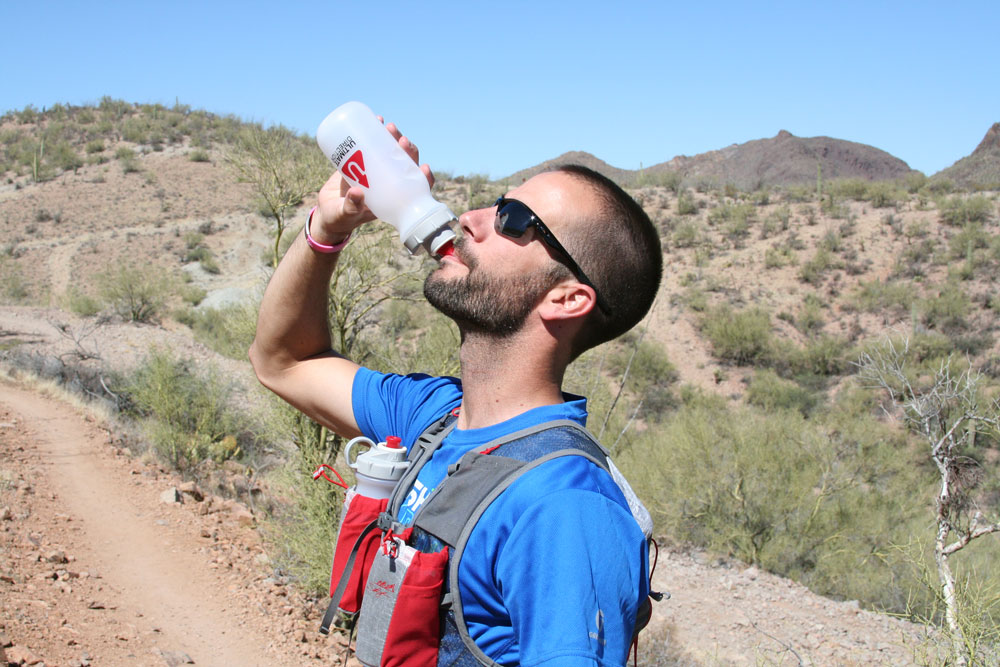 Taking A Sip Of Water From The Fire Hose

That’s not to say that the SJ Ultra Vest is perfect though, as there were a few things that rubbed me the wrong way. The big one is the water bottles, specifically, the Kicker Valve. The chances that I’m an idiot and just can’t quite figure them out are pretty high, but as far as I can tell, there’s no good way to get water from these bottles. It’s kind of like a bite valve, but if you bite down too hard you don’t get any water, which is usually what happens while running. If you just squeeze the bottle, it builds up pressure and then shoots a jet of fire hose water into your face. It seems to be easier when walking, but that’s not the point of the vest. I seriously think they need to try something different here. 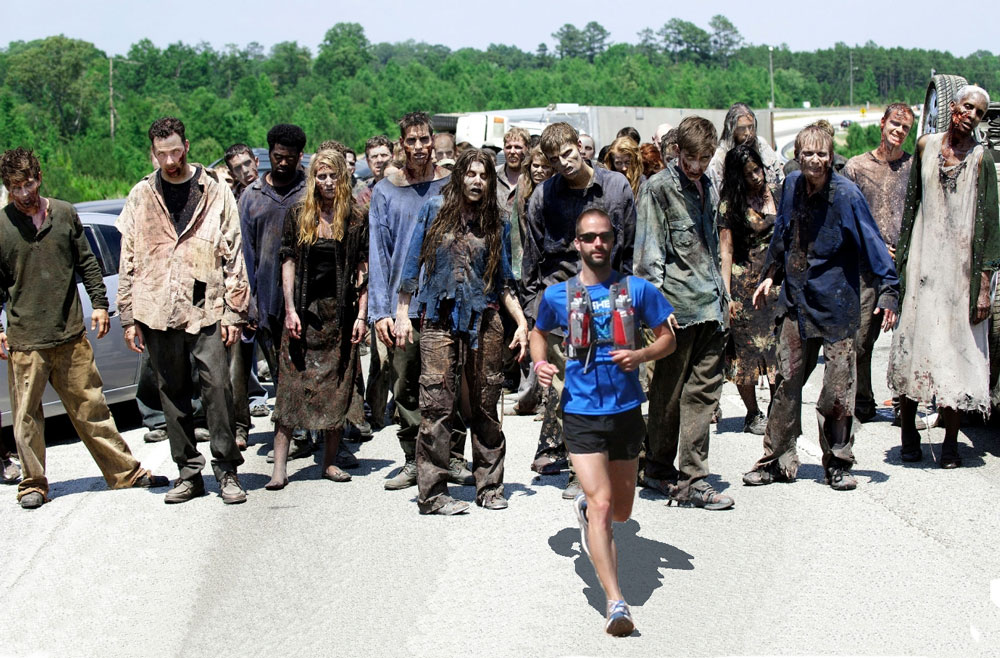 Objects In The Mirror Are Closer Than They Appear

I was also surprised to find out that the mesh pockets about the bottles don’t quite fit a cell phone, as advertised. In addition, the Lat Pockets were not accessible while wearing the vest. This isn’t really an issue, as you do have 8 other pockets on the front of the vest that you can stuff full of everything you need, I only mention it so you can plan ahead. Know that if you put anything in the Lat Pockets, you’ll have to take the vest off to get to it. Finally, speaking of the front pockets, the pockets on the sides of the water bottles can be difficult to get gels into and out of when the bottles are in there, as the packets sometimes catch on the mesh. 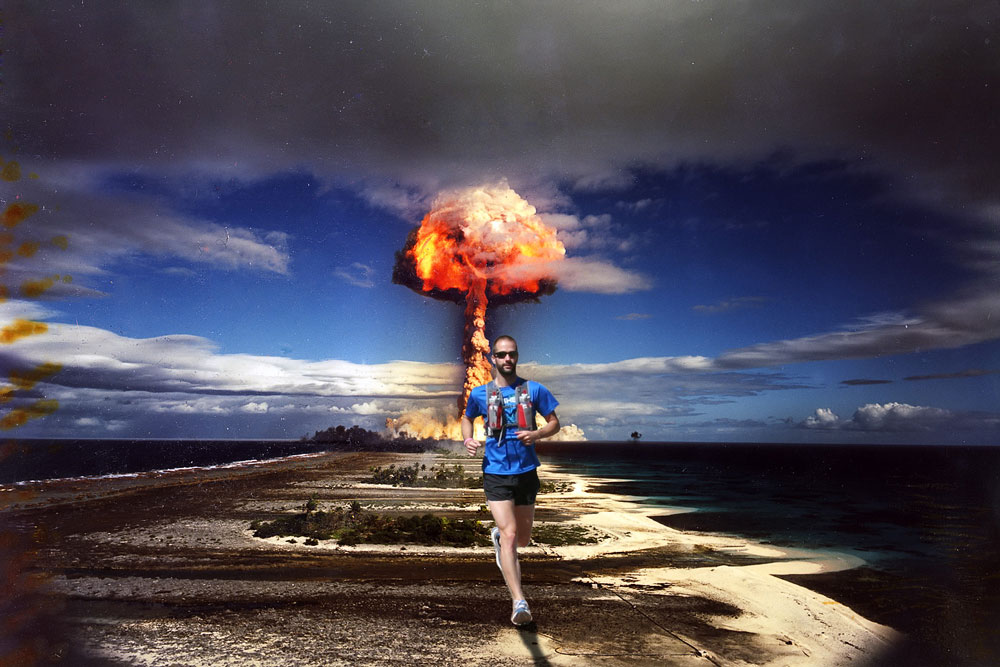 Lay It On Me

Here’s my two cents: the vest is lightweight, doesn’t seem to bounce or chafe, and looks to be quite durable. The amount of storage is quite shocking, especially the rear main compartment; it can hold way more stuff than you expect it to be able to. Unless you can stop and refill or you add a reservoir in the back, the amount of fluid it holds is probably not enough for runs lasting more than a couple of hours of training, but with aid stations, I think it would make an excellent ultramarathon race vest, especially if you expect changes in weather and need to bring gear along. The only major pain point is the Kicker Valve on the water bottles, but personally, I’m just going to use different bottles with the vest. Overall, I think the vest is great and would have no problem recommending the Ultimate Direction SJ Ultra Vest to marathoners and ultramarathoners alike, for both training and racing.

A method behind the madness – a simple approach for a…