You may see many people writing about SRAM Red eTap; however, I have had the privilege of using the product for several years now, so I can speak to the development and challenges SRAM has faced getting this newest lineup into consumer hands. I don’t recall if it was late 2012 or early 2013, but one of the higher-ups (to remain nameless) flew out to our headquarters because he had something to show me. I distinctly remember going up to one of our conference rooms where he pulled out a handlebar and one of the first renditions of SRAM’s electronic shifting. It was simply amazing because it was SRAM’s first attempt at electronic shifting and they hurdled the wire barrier that is present in both Shimano’s Di2 system (formally introduced in 2009) as well as Campagnolo’s EPS (developed in 1992, but not fully released until 2011). Since SRAM has cut the cord on electronic shifting, it enables astronomically easy installation to allow many people to upgrade their formerly non-compatible frames to finally enter the world of electronic shifting.

SRAM Red eTap is composed of a road and aero version; at the heart of the system is the Red eTap front and rear Derailleurs and shifters (the road version is controlled by a standard-looking paddle shifter and the aero is controlled by a small unit called a BlipBox). All of the wireless communication is through SRAM’s proprietary 128bit encrypted AIREA network. AIREA will only allow one pair of shifters to be paired to the derailleurs at one time, which is important so you don’t have people trying to sabotage your bike. In fact, SRAM put 500 eTap setups in the same room for testing and was able to successfully shift them all without any cross talk. The power to this system is accomplished by individual batteries on each component so battery management does get to be a bit burdensome; however, with our plug-in society the challenge is negligible.

The front and rear derailleurs are both powered by their own eTap Batteries. These batteries are 32g and have to be removed from the derailleurs to charge, with a complete charge time of 45 minutes. They are very powerful, long lasting Lithium Ions and provide a stated 600 miles (1,000 kilometers) per charge; however, this range can be vastly extended based upon terrain and getting up to 1,500 kilometers is easily achievable. 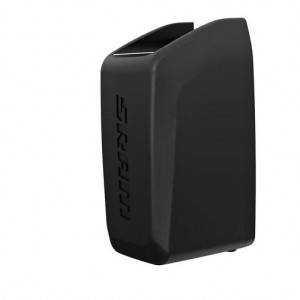 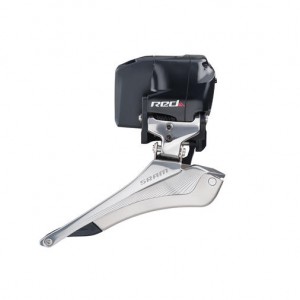 The RED eTap front derailleur installs easily to any standard braze-on mount (clamp adapter is available) and is powered by the eTap Battery. This derailleur uses SRAM’s Yaw technology (present on the mechanical RED and Force groups), which eliminates the need for trimming the front derailleur when in cross-chaining situations (i.e. chain in the big ring and big gear on the cassette and vice-versa). On top of the Yaw technology, the front derailleur will automatically adjust through the gear range to avoid unwanted contact with the chain, all without any rider input. 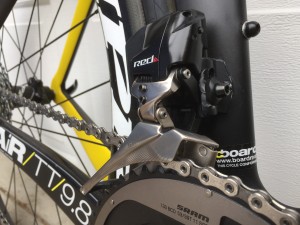 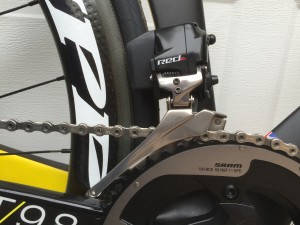 This derailleur is specifically designed to work with SRAM X-GlideR 11-speed chains and Yaw compatible chainrings. 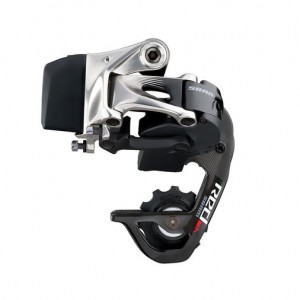 The 238g Red eTap rear derailleur installs like any other rear derailleur, sans the cables. The rear derailleur is powered by the eTap Battery which is hot swappable with the front derailleur – this unit also contains a crash sensing mode and will decouple the gearing mechanism when a crash is imminent so as to hopefully save the servos and gears from being destroyed. 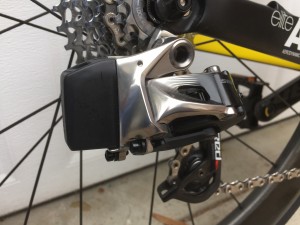 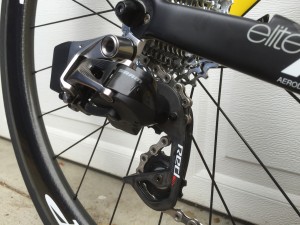 The rear derailleur is compatible with SRAM PowerGlide, the new 1190 cassettes, and SRAM X-GlideR 11-speed chains. SRAM has also put an ANT+ radio in the rear derailleur that will be used for future communication with head units (i.e. most likely with a Garmin showing gear selection and battery status). 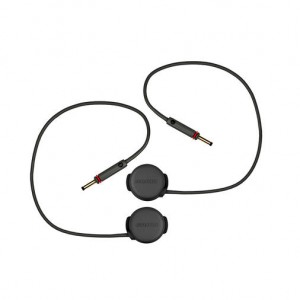 The Blips are the one part of the eTap system which are wired and come in 4 lengths (150mm, 230mm, 450mm, and 650mm). The 150mm and 230mm lengths are ideal for road setups and enable you to mount remote shifters anywhere on your bars and plug directly into the road shifter (up to two pairs of blips). The 450mm and 650mm lengths are for aerobars and plug into the BlipBox (see below). The 650mm Blip will work with all aero setups; however, for those with smaller cockpits the 450mm is ideal. The best way to figure out your Blip length for an aero setup is to use a cloth measuring tape or string, and measure the distance from where you want your shifter to the back end of your extension, then add 10-15mm. 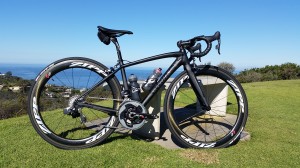 The SRAM eTap Road version is comprised of the eTap Front and Rear Derailleurs and the SRAM RED eTap Shifters. The shifters are what make having an eTap equipped bike really fun to ride because they use race car-inspired paddle shifting technology. 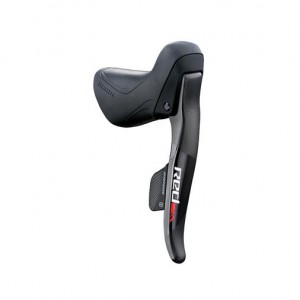 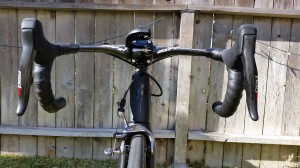 This setup is extremely intuitive and I was able to pick it up in a matter of minutes and, more importantly, brought a new level of excitement to riding a bike! On top of this, having only one larger paddle on each shifter makes it much easier to shift when using full fingered gloves. These shifters can be adjusted for reach, great for those with smaller hands, and have great ergonomics. 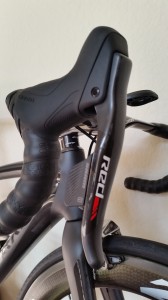 These shifters communicate with the derailleurs via the AIREA network and are powered by button cell (2032) batteries (one in each shifter), which last for about two years and are easily replaced. As with the derailleurs, each time you shift there is a small light indicator showing the battery charge level– once you see the red light you have about 4-months before you need to change your batteries. You can also micro-adjust your derailleurs on the fly by simply pushing the function button (located on the inside of the paddle) and then use the paddle to micro-adjust. 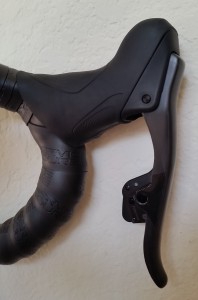 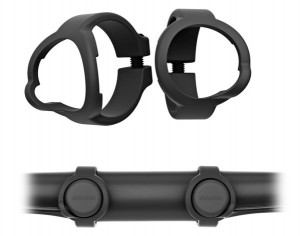 The Blips are held on to the road bars with optional 31.8 Blip mounts which are perfect for putting the Blips in the climbing position.

The SRAM eTap Aero version has the same front and rear derailleur as the road version, but the shifting is controlled by a unit called the BlipBox. The BlipBox communicates with the derailleurs via the remote wired Blips. 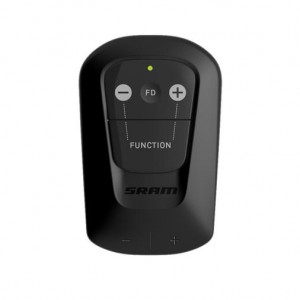 You are able to connect up to four (4) Blips to the BlipBox with the ideal setup being Blips by the brake levers and at the ends of the aerobar extensions. The BlipBox has a quarter-turn mount and can be mounted to any Garmin-compatible mount. 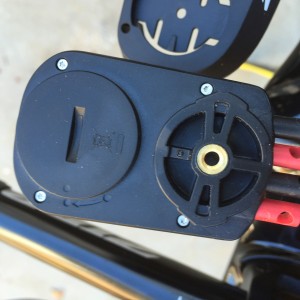 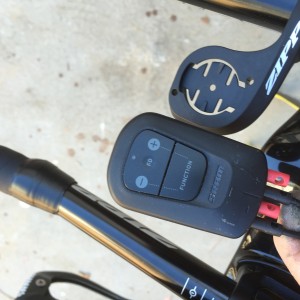 The pictures below show a couple different mounting options; however, you can also get creative and mount it out of the way (i.e. under an armrest pad) by using the threaded mount. 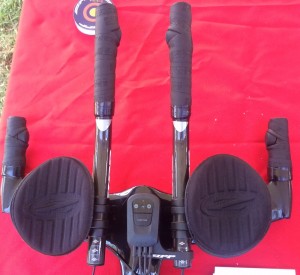 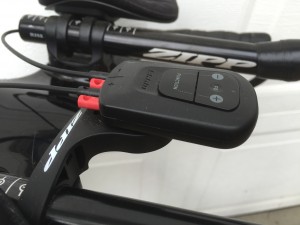 As with the derailleurs, each time you shift there is a small light indicator. The BlipBox also has the same derailleur micro-adjusting capabilities as the road shifters – simply push the function button (located on top of the BlipBox) and then use Blips to micro-adjust the derailleurs. Also present on the BlipBox are +/- buttons which are used for shifting the bike as well. Why would you ever use the BlipBox to shift your bike? Well you wouldn’t, but a mechanic could have their own personal BlipBox, pair up your shifters while working on your bike and then re-pair your shifters when they are done – happy mechanics make for happy bikes.

The cycling world has been eagerly waiting for SRAM’s electronic groupset and by bestowing it upon us, they have delivered the most exciting advancement in road and triathlon riding in the last five years.

Six Tools to Unlock Your Racing Potential For 2016

Is the Smart Trainer Smarter Than You? 5 Reasons to Upgrade This Trainer Season!