Pam Kallio – Wife, Athlete, Employee and one of the toughest grandmas you will ever meet

It is not often that one of our very own employees gets to race in Kona, but that is exactly what Pam Kallio, our Customer Service and Distribution Center Manager, will be doing this weekend at the Ironman World Championships.  This is Pam’s 14th Ironman and her first trip to the big island – a trip she earned by winning her age group (60-64) at Ironman Arizona last November. We had a chance to catch up with Pam and ask her a few questions.

I needed to earn it legitimately.  If it was meant to be, then I would get there when the time was right, if not then it wasn’t meant to be.

Q: It took 13 attempts at doing an Ironman – why didn’t you just apply for the Ironman Legacy program (Note: the Ironman Legacy allows athletes who have competed in at lest 12 Ironman races, among other qualifications, but never made it to Kona, to apply to race in Kona)?

A:  That’s easy to answer.  It’s a World Championship.  They don’t have lottery slots for the Super Bowl, or the World Series, or the FIFA World Cup or the Rugby World Cup.  It might sound kind of “corny,” but if I wasn’t good enough to qualify in a strong field, then I felt like I wasn’t good enough to go.  I needed to earn it legitimately.  If it was meant to be, then I would get there when the time was right, if not then it wasn’t meant to be.

Q: Tell me about your bike.  You have been on a Cervélo for many years, why did you go to a QR?

A: Well, my boss would beat me down hills and I figured it had to be the bike, and he was on a QR! 😉 Besides, it took 13 IM tries on a Cervélo to qualify, so I thought I would try the QR speed machine for my first Kona race! I loved my Cervélo, but when it came down to fit, the QR Illicito fit me much better.  The QR actually handles much better in crosswinds and is faster over all of the terrain where I have trained.  I seriously love this QR.  It is the “handiest” bike that I have ever ridden.  I can stay aero no matter what the winds are and can trust it explicitly while descending. 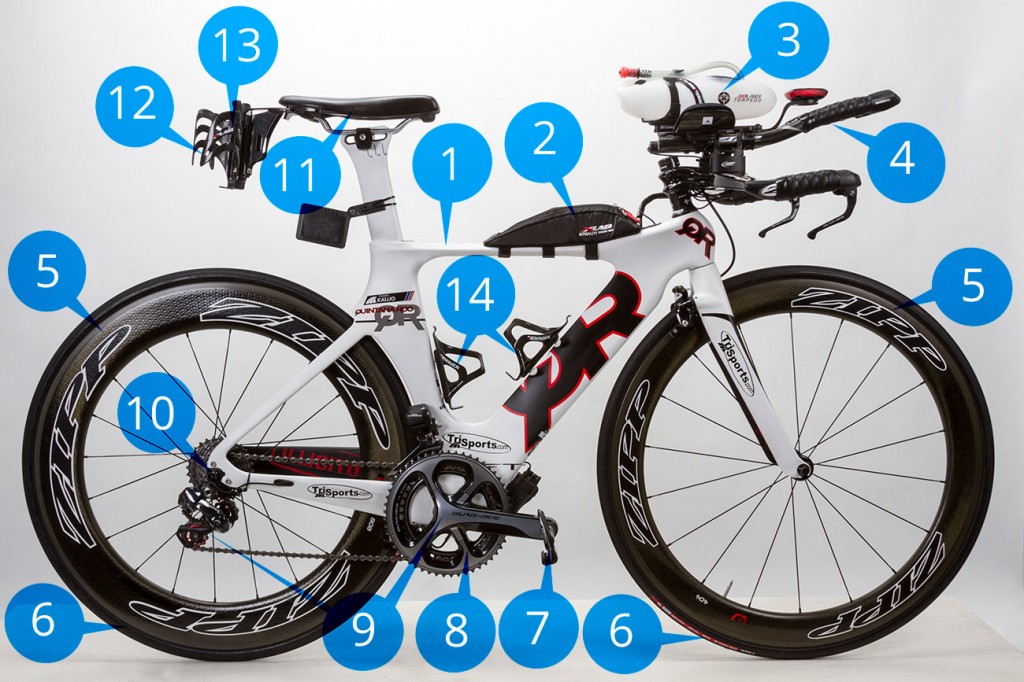 Q: What other key gear will you be using on race day?

A: For my jaunt through the lava fields I will have the Hoka Cliftons protecting my feet from the torching asphalt.

A: Yes, our CEO, Seton Claggett, is my coach.

Q: Wait, your boss is your coach and your coach is your boss?  How does that work out, isn’t he a slave driver at work?

A: Well, on one side there is nothing to hide behind, he sees me in training and he sees me at work, if I am “off, tired, stressed,” he sees it all.  No excuses, he expects 110% at work and he expects 120% in training.  I remember reading an article years ago about Michellie Jones’ husband coaching her and he said he could see in her eyes how she really felt, if she was over trained… having Seton as “coach” and Boss is the same.  I have to look him in the eye every day and respond either to how I excelled or failed at work AND the same with a workout – I have to look him in the eye and respond with why my power numbers or run pace either was or was not on target.  That’s motivation to excel in both work and training, to always do my best no matter what, no kidding myself and no hiding from the truth.

Q: You are now a grandma, what do your kids think of you doing this crazy sport?

A: I have 2 daughters, both married and the oldest, Lexi, just had her first baby in June.  They both ran track and cross country in High School and Kate went on to run both at the University of Florida.  I think they both think I’m a little crazy…well maybe more than a little! I can hardly wait till Caden, who is now only 4 months old, gets his first bike!!

Q: You started triathlons when you were 47 and you are now 61, how is your fitness?

A: LOL!  I think I am fitter now than I have ever been in my life.  Thanks to having a coach who believes in me and will push me past what I think my limits are, I am far stronger in all 3 triathlon disciplines than I was 14 years ago.

Q: Because of your position at TriSports, you are frequently front and center with customers. What is your best customer service story?

A:  I actually have two.  Joseba is from the Basque region of Spain.  He rented a bike from TriSports.com for IMAZ 2013 when we had our store in Tempe.  When the race came around, the Tempe store had closed and, since I was racing IMAZ also, I drove the rented bike up to him in Tempe.  We met him and his new bride – they were actually on their honeymoon.  He had just done Kona the month before and they were still honeymooning!  We became friends and have remained in contact since keeping track of each others’ races on FB and other social media.

My second story is that I was at work early one day about a month or so before IMAZ last year and the phone rang.  It was before we opened but I was there and figured, “what the heck?”, so I answered the phone.  It was Ginny, a gal from Pennsylvania looking for some swim merchandise that she could not find on our website.  I had been looking for the same items for myself the past day or so and knew exactly where they were, so proceeded to chat with her while I assisted her in finding what she wanted.  It came out in the conversation that she was doing IMAZ also, and was traveling by herself without her husband or kids.  I’ve done a couple of IM races where Norm, my hubby, couldn’t go and know how it feels to do an IM alone, so I promptly gave her my cell phone number and said let’s get in touch at IMAZ (this was after we found that we were in different age groups, not that we are competitive or anything….).  We did meet up at IMAZ for the practice swim, and traded some race strategies with each other.  Ginny qualified for Kona, also.  We have stayed in touch since.  In fact, we are staying at the same condo, met on the flight out to Kona and are doing some of our training out here together!

Q: What one piece of advice would you give to the other grandmothers out there who are doing triathlons and want to make it to Kona?

Hold onto your dreams and don’t let anyone else tell you what you can’t do.  Get a coach who will demand nothing less than the best you have to give – always – with no excuses.  Physical age is only a number, meaningless in your heart and soul.  I have dreamed of riding on the Queen K so many times, it was a little surreal actually riding it today for real – not in my imagination and not on the Computrainer, but with the wind in my face and the smell of the ocean and the heat of the lava, and all because I didn’t give up on a dream and I had a coach who would accept nothing less that the best that I had to offer.

The In-Between: Tips To Keep You In The Game

10 Triathlon Tips You Have Never Thought Of (But That Make You Faster!)