Ben Kanute is no stranger to hard work. Growing up in a family of triathletes will make one accustomed to weekends of training and racing. Both of Ben’s parents competed in ultra-distance triathlons and his siblings participated in junior triathlons. Choosing the prestigious college prep and military high school, Marmion Academy, was one of the many decisions Kanute would make that would ultimately lead him to his road to Rio. Although his disposition is humble and unassuming, you can sense the overwhelming ambition lurking just below his composed demeanor. On his way to his first Olympics and competing as one of the youngest athletes in the field, Kanute will continue to be a rising star in the sport.

What are you doing to prepare for the Olympics both mentally and physically?
I’m just trying to do the same thing that got me here, doing the same types of workouts. I work with a sports psychologist and I guess all the confidence comes from doing consistent hard work. We are not making any huge changes because I qualified in May and the games are in August, so it’s not a whole lot of time to go out and try anything new, so I’m sticking with what works.

What has been the single best piece of training advice throughout your triathlon career to help you get where you are today?
There is so much; it’s an accumulation of all the different advice, but probably the best is consistency. It’s just being able to consistently put in the hard work. Back when I was a junior on the team, you would always look forward to training camps, where you put in this big block of work. That is all good and fun and some people still do that, but you want to able to consistently put in good hard work over a period of time. That’s what makes you better. It’s just like racing; you want to be able to consistently put up results again and again, instead of being up and down.

How has this season been overall in regards to any injuries or burn out?
This season has been great. I feel like I have been the most consistent than I have been in a long time. Last year, I struggled a little bit with consistency. I was living in Santa Fe at the time and for me it was like being at one big training camp. So it was a little too much triathlon all the time, so I decided to come back to Tucson, Arizona. I just found that this has the best balance for me.

At Rio, what are you most looking forward to?
I think the entire experience; I just want to soak in everything. I got to go down there last year for the test event to see the course and race on it. That was one of those races where nothing went well for me. It’s my first Olympic Games; I want to soak in the city, the atmosphere. It’s such a huge stage; I want to make sure I make the most of it.

Are you going to be employing any new race tactics or are you sticking to what has been tried and true?
It’s the Olympics, so I mean if anything strange happens there like a break out performance, it might as well happen there. But my racing has pretty much always been the same thing, to go hard on the swim, bike, and then try to follow it up with a great run. I mean a hard race suits me the best, that’s what I’m hoping for, and that’s what I’m expecting for sure. 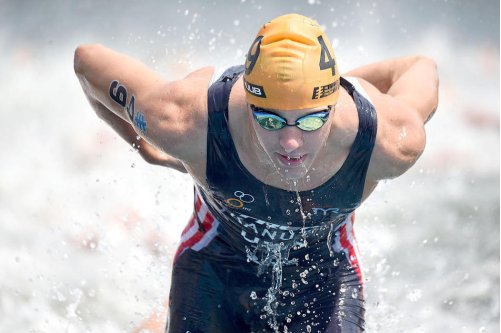 Do you have any favorite training swim gear or tools that you like to use?
I keep it really simple. I have paddles that I love to use, I love to mix it up with the pull buoy, but I’m not a huge fan of kicking- so I use the kick board pretty sparsely. Recently, I have been training with the Ford Aquatics team and they do a lot of kicking, so I have been using it a little bit more. In the past, when I was growing up, we used everything from paddles to snorkels and fins. I have even trained kicking with tennis shoes on in the pool.

Which of the three disciplines is your favorite?
This is always a hard question. I like all of them, that is why I do triathlons because it switches up and keeps me interested. I bounce from one to the other on which one I enjoy doing more. Traditionally, my strengths have been the swim and the bike, but I feel like my run is coming along and becoming just as good as the others. I feel like I’m becoming better all around.

How do you get motivated when you’re feeling unmotivated?
At that point, if I’m not prepared to go out and get it, it’s still my job. It’s the same reason why everyone else has to get out of bed and go to their job that they may or may not like. I may not love triathlon every minute, but you have to put in the work. I’m working towards a goal. I reached my first goal of going to the Olympics. Now the next is to compete well in the Olympics. So I have that going for me right now for the next month or so leading up. The goals have always have kept me going, between those and just trying to be as fit as I can possibly be for each race. 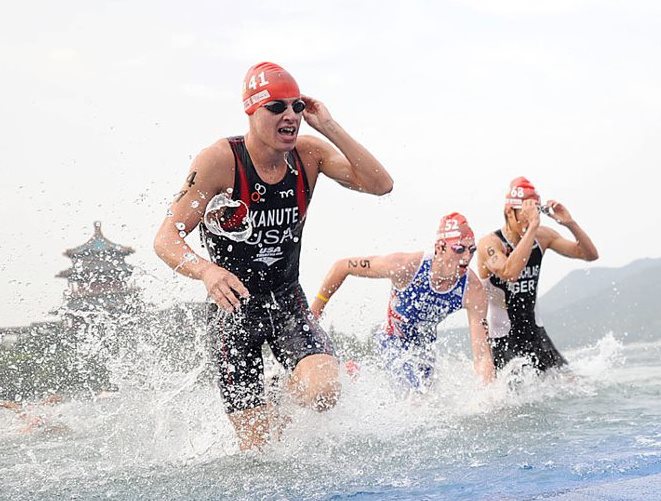 How does nutrition influence your success?
I watch what I eat pretty closely. It’s a lot of fruits and vegetables, making sure I get enough protein. I don’t really take any supplements or anything like that. I’m trying to get everything from what I eat. I usually monitor my blood panel levels when I’m at really high altitude, if I’m really lacking in nutrition I take supplements then, but usually it’s through a healthy diet. But I still think everything in moderation, like grab a beer with my friend or a cookie once in a while.

After the Olympics, what’s next?
For long term goals, I think Tokyo 2020. I feel like I’m young and have quite a bit more to improve on, so I’d like to stick around with the ITU stuff for a little bit longer. But I would also like to try my hand at some 70.3 races. I’m not sure exactly what I’m going to do, but it’s a post-Olympics year, so I’m going to try different or new things out.

Do you have any secret talents?
Not necessarily, but I can juggle. I can casually juggle; I guess you could say I’m a casual juggler.

Do you have any pre-race rituals?
I don’t know if I have any specific rituals, but usually the night before races I watch some really bad made for TV movies. Growing up, if I was traveling with my dad we would always look for really bad movies to watch to brighten up the situation.