By speterson Last updated Jun 20, 2017
young athlete triathlon in front of a sunrise over the sea
Share 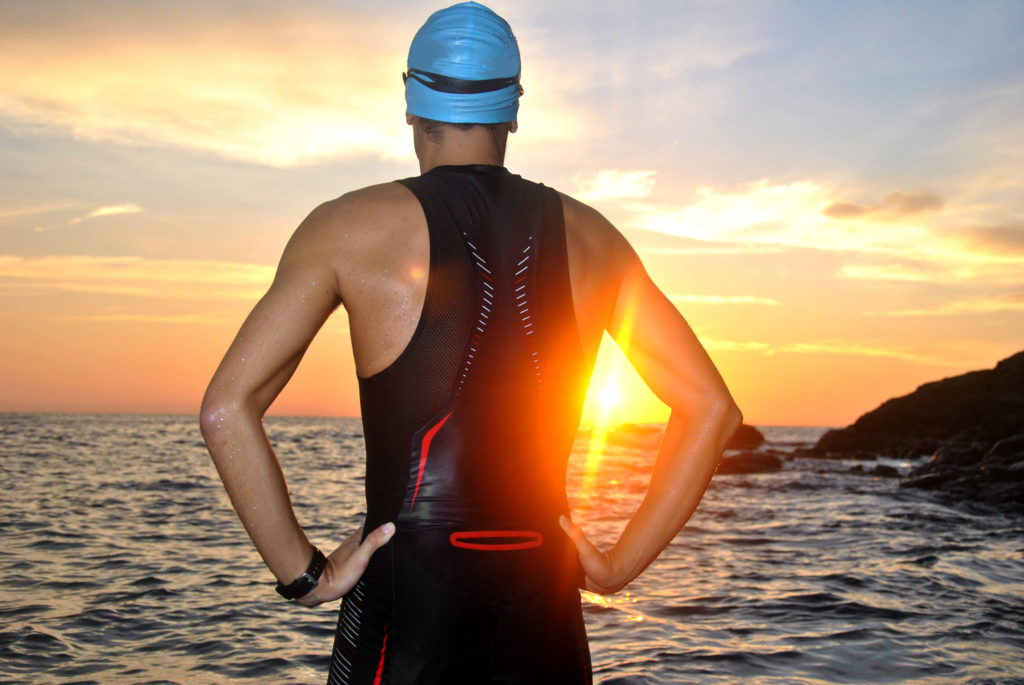 And in some cases, dangerous.

If you feel anxiety bubbling up as you stand on the lake or ocean shore, you are not alone. But this fear is completely rational and can be easily combated with the proper preparation.

Most of the anxiety stems from the fear of unknown. While statistics show that open water swimming is actually quite safe, it is always good to be prepared for any situation.

The most common fear people have is unknown potential creatures below them. Even though the odds of getting bit or eaten by something are tiny, there is a logical reason to the fear.

Hollywood combined with real life incidents give way to this very common fear. 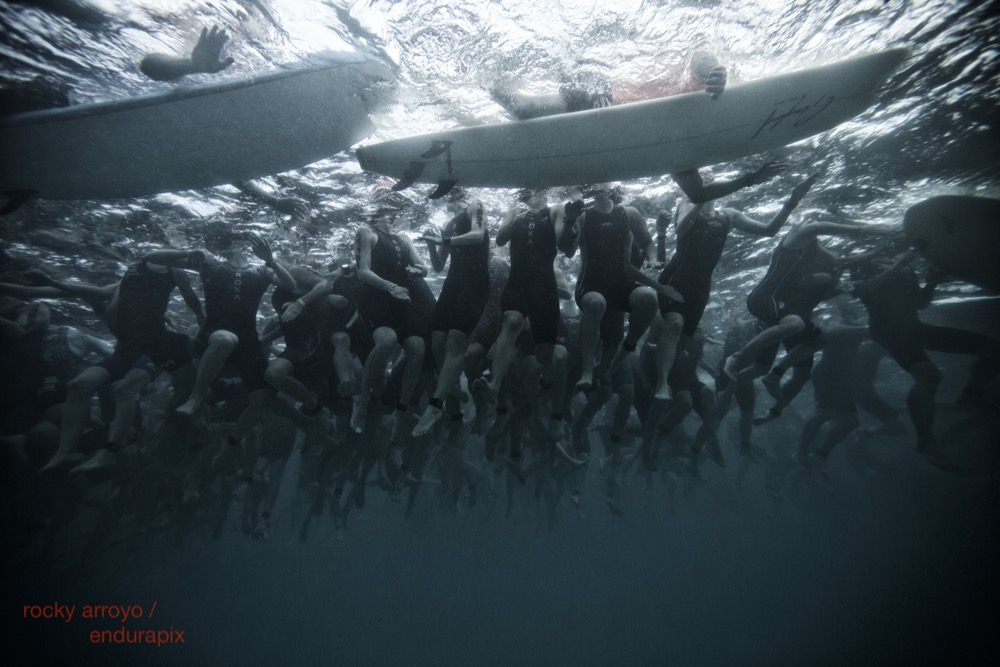 Start With The Controllables
1. Cardiovascular Condition.
Before you even step into the water for either a race or just practice, make sure that you get your heart checked for any abnormalities. In the past 10 years, a large sum of open water swimming fatalities have come from athletes who did not realize that had an underlying cardiovascular condition.

Combining a cardio issue like this with the shock of the cold water and the anticipation of a race can result in a disaster. If and when you are cleared, a good warm up that includes pushups, jumping jacks, arm swings and jogging can help your heart ease the transition into cold water.

If for some reason you can’t get in the water before your race, at minimum, splash cold water on your face, as this will trick your body into preparing for the cold submersion. 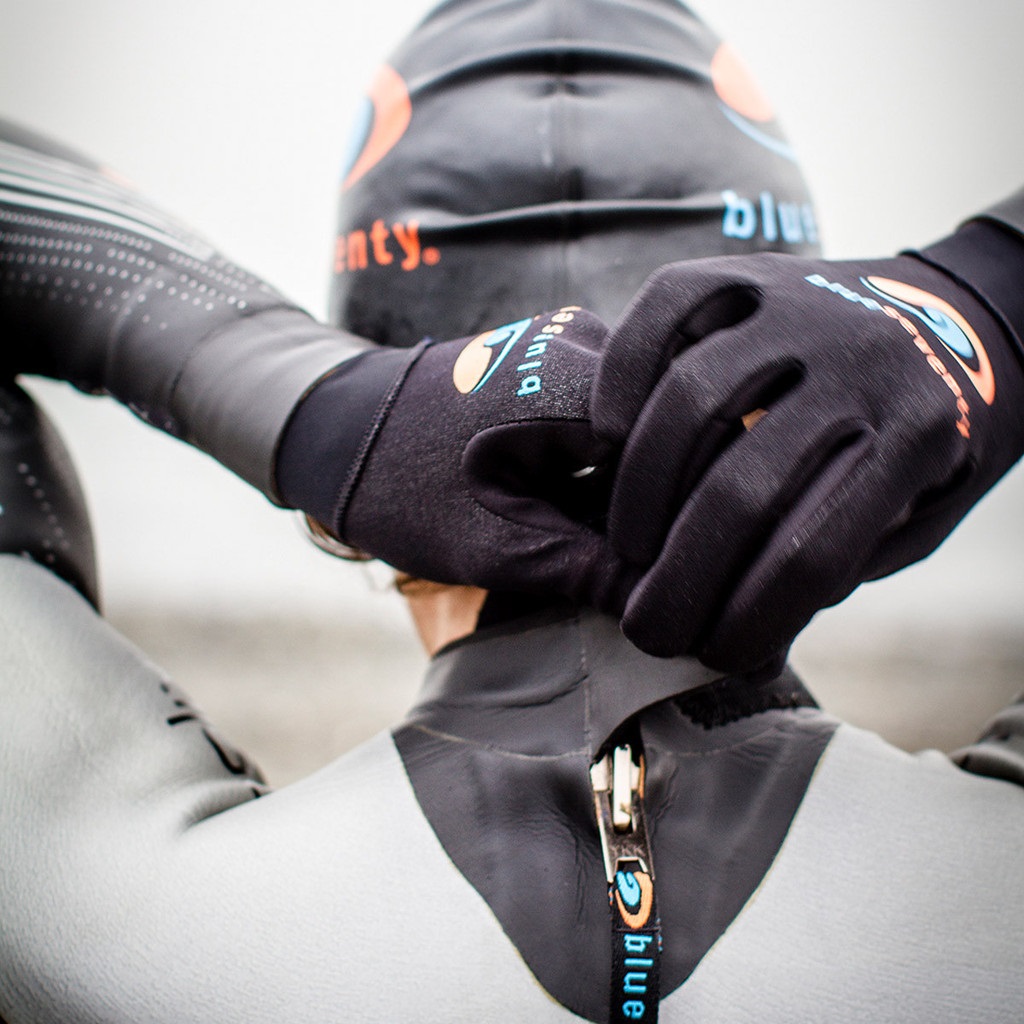 2. Preparation for the conditions.
If you know the water is going to be cold (sub 15 degrees Celsius/59 degrees Fahrenheit), then definitely wear a long-sleeved wetsuit, preferably in bright colors like this one, a bright fluorescent swim cap. For extra warmth, use two caps: a neoprene with a silicone one overtop and neoprene booties, which also help navigating rocky beaches. If you know your event will be in extremely frigid waters, Blueseventy makes a thermal wetsuit designed especially for coldwater.

Warm clothes for after the swim are also important. Most hypothermia cases are not from the water temperature but from the drop in temperature after you strip off your wetsuit. I (Kevin) know about this first-hand; after swimming in 50-degree Fahrenheit water in the Alcatraz swim in the San Francisco Bay once, I ended up with early stage hypothermia! It’s not fun, but preparing can help you avoid this.

3. Wetsuits.
With their extra buoyancy, wetsuits can be a huge help and an extra safety measure especially for beginner swimmers, but be sure that it is well-fitted and that you have practiced in it.

A wetsuit that is too small will restrict your breathing and can lead to hyperventilation, while a wetsuit that is too large will cause drag and weigh you down. Practicing in the wetsuit as much as you can will allow you to get used to the feeling of swimming in a wetsuit, which is quite different from your swimsuit in the pool.

In both cold and warm temperatures, remember bright colors are your friend. Without them, boats, kayakers, fellow swimmers and–if it comes to it–emergency rescue–can not see you, and rest assured that the bright colors will not attract sharks or killer whales–unless you plan to swim at Sea World. 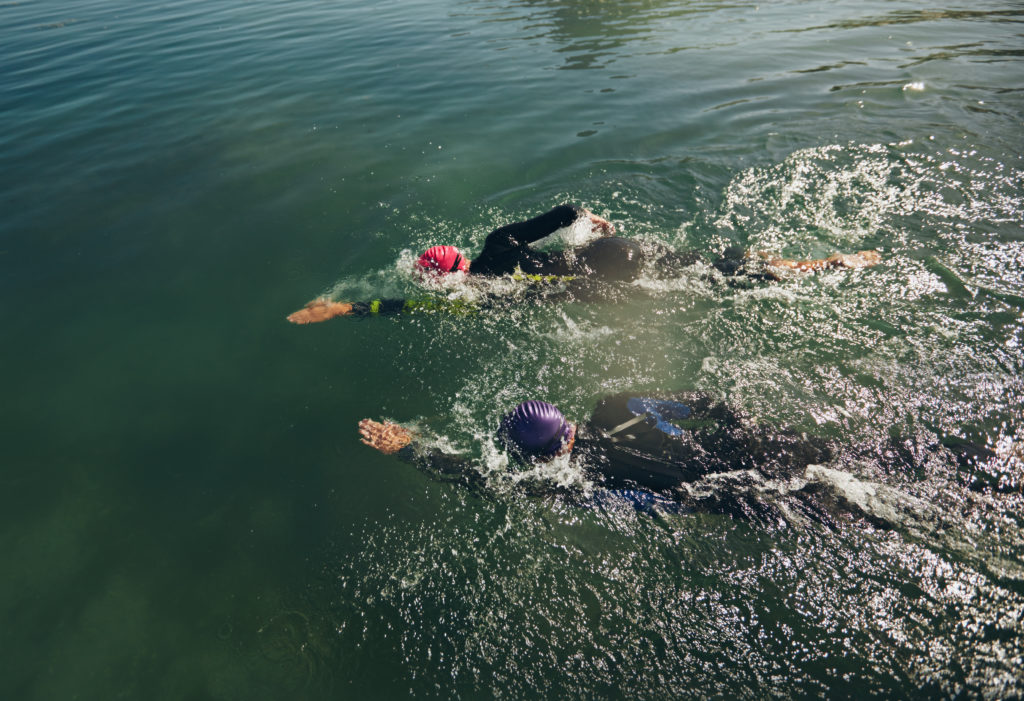 4. Never train alone.
Grab some friends who are either swimmers themselves or who can kayak or SUP near by and keep an eye on you. An emergency contact should also know where you are and when you are expected to get out. Personally, I (Chris) always text my wife before I get in with how long I am swimming and then again when I get out to confirm that I am alright.

5. Be present!
This seems cliché and may be obvious, but there are so many factors in open water swimming that can throw you off, this is well worth mentioning. Staying present will allow you to deal with each distraction as it arises- even getting hit or pulled can be easily absorbed with a mindful approach to swimming. A couple of ideas here are to simply count your strokes, or think of a word, and repeat that word in your head as you swim.

The Non-Controllables
1. Sight.
There’s a lot you can do to practice sighting, and this is a big part of the challenge of open water swimming- staying on course. However, some of it may be out of your control. Sometimes the person you’re following doesn’t know where they’re going. Other times you just mistake where the finish line is. Practice can help here but it doesn’t eliminate every possible thing that could go wrong. Read more about sighting with these 8 Tips for Sighting.

2. Things that can bite and/or eat you.
Well this one is very rare, but its true- in the ocean, there is the element of the unknown. Let’s look at the stats: From the Washington Post: “According to the file’s analysis of 2000 data, beachgoers faced a 1-in-2-million chance of dying from drowning and other causes based on visits to East and West Coast beaches. By contrast, they faced a 1-in-11.5-million chance of being attacked by a shark, and less than a 1-in-264-million chance of dying from a shark bite, since just one person died that year in U.S. waters from an attack. Put another way, more Americans were killed by collapsing sinkholes (16) than sharks (11) between 1990 and 2006, and more by tornadoes (125) than sharks (6) in Florida between 1985 and 2010.”

In the rare case something does happen, be prepared for the worst. An open water safety device or an inflatable is an excellent idea- especially for beginners. While it might seem like a hassle, it can be a lifesaving measure if the weather or your body were to go awry.

Still nervous? Practicing is the best cure for fear and anxiety when it comes to open water. Start small and swim close to the shore with friends close by and on a course that allows you to see the bottom. As you become more comfortable gradually swim further and further out. No need to be a hero in the early stages.

Open water swimming does not have to be scary. With the proper preparations, you can swim with calm mind and be able to focus on what is important: your workout.

About the Authors: Kevin Koskella and Chris Hague are coaches at Tri Swim Coach. Kevin is the Head Coach at Tri Swim Coach. He was an All-American swimmer in college and coaches masters swimmers and triathletes. Kevin contributes to Triathlete Magazine, Inside Triathlon Magazine, Men’s Health Magazine, Active.com, and many more.

Chris Hague is the Assistant Coach at Tri Swim Coach, and swam competitively at the collegiate level and has competed in triathlons since 2007. Chris is now juggling a full time triathlon career while pursuing a career in psychology and public health.

It is Never Too Late to Start